In existence since the 1980s, the constituency of Westmorland and Lonsdale is named after the defunct county and Lancashire Hundred. It was originally represented by Michael Jopling, who had been MP for Westmorland immediately prior. As Mrs Thatcher's hapless former Agriculture Secretary, he is a member of the House of Lords. He had always had five-figure majorities, with the Liberals and Liberal Democrats always second, however for the 1997 election he handed over to Tim Collins, a rising star in the Conservatives. Collins was elected with a much reduced majority of 4,521 (9%) to the Lib Dems three-time candidate with the same surname.

With the seat now in play, a Lancashire councillor in his '20s, Tim Farron, was selected. In the 2001 election Tim and the local team put on 7% but Collins took some of the Labour slide, and his majority was further reduced to 3,147 (6.5%). With the seat now more marginal but not within the magic 5% there was yet more of a struggle to prize the seat from the Tories. Tim was re-selected, campaigning throughout before finally winning the seat in 2005 by a majority of 267. Collins was the opposition Tories Education spokesperson, making himself widely available to the national media during the election, and once even cadged the leader's helicopter to get from London back up to Westmorland and Lonsdale to campaign. Tim and the team, meanwhile, were trying everything to get over the line. By 2010, Tim was returned with 60% (+14.1%) of the vote and a majority of 12,264. In 2015 it was reduced by 5.5% but still a comfortable 8,949 at a difficult time for the party. Things changed quite dramatically in the 2017 snap election, as Tim tried to balance the commitments and the glare of the unforgiving media as Leader of the party with local campaigning. He held on by 777 votes.

The South Lakeland District Council boundaries are similar, except they include a part of the Barrow and Furness constituency. The council has been run by the party since 2006. Following this year's local elections the Liberal Democrats have 32 councillors (with 3 gains) to the Conservatives' 15, Labour's 3 and the Greens' 1. Cumbria County Council is currently run by a Labour / Liberal Democrat administration.

By the time of his selection prior to 2001, Tim had already contested North West Durham in the 1992 election while still at Newcastle University - where he had been President of the students' union - and was working at Lancaster University. He later worked at St Martin's College in Ambleside. Raised in a single parent household in Preston, Tim joined the Liberal Party aged 16 while at sixth form college. 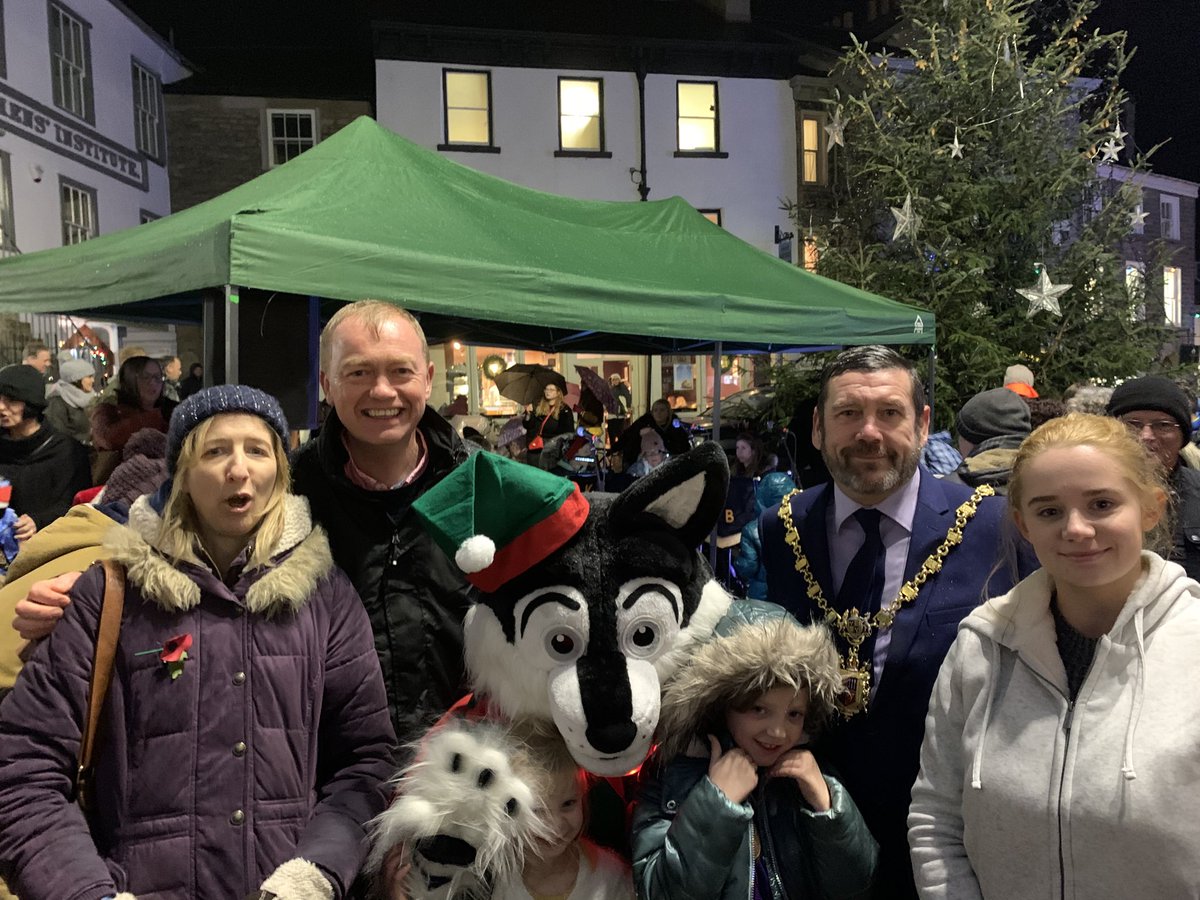 Tim has built up a solid reputation as a hardworking constituency MP, over a period of 15 years. He is highly credited with the saving of NHS services such as at the Westmorland General Hospital, and bringing more in, including with this current petition https://www.southlakeslibdems.org.uk/radiotherapy?recruiter_id=27305 In 2011, Cumbria University reopened the Ambleside campus of the former St Martin's College, and Tim commented:

“Knowing that our campaign has meant that the campus has a major future is great news."

“I will now work with the community, Lakes parish council and others to make sure we hold the university to its word.” [News & Star]

Fighting against the diminishing of rural services including buses - the complete absence of subsidies - and the recent closure of Kendal court is at the top of the agenda. In Parliament, he has taken a keen interest in welfare benefits and the difficulties and injustices of the system. Tim has been the party's spokesperson on rural affairs on two occasions.

Tim also has a significant following and amount of engagement on facebook. https://www.facebook.com/timfarronmp/videos/781136125692363/ 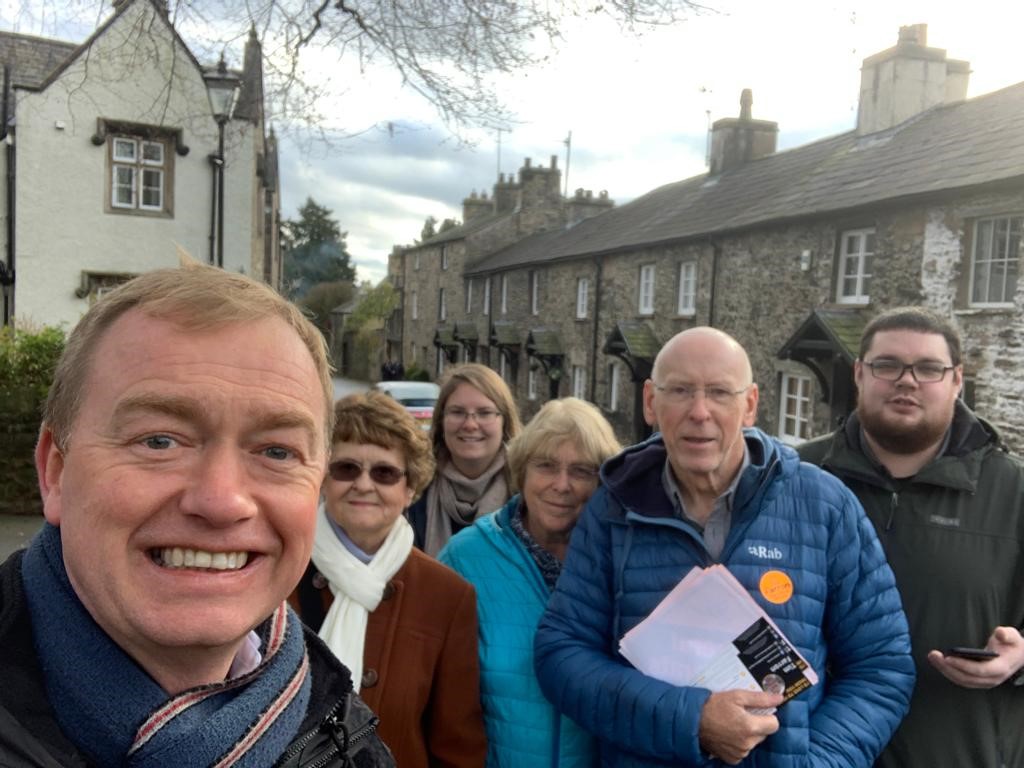 He was not appointed a minister during the coalition government, and voted against the tuition fees rise, the 'bedroom tax', and the introduction of 'secret courts' - all government policies. After the near wipe-out of 2015 and the immediate resignation of Nick Clegg, Tim was elected as Leader after a contest with Norman Lamb. Unequivocally Remain, following the lacklustre referendum campaign, Tim immediately called for a referendum on the final deal emerging from the Article 50 process, and even that in the event of Brexit the Liberal Democrats would be the party of 'Rejoin'. We won back the Richmond Park parliamentary seat in a by-election. In the general election called by Theresa May in June 2017 in an attempt to gain a mandate for her hard Brexit stance, no-one should have been in doubt where the Lib Dems stood, however, it was not time for the electorate to listen to us. Nevertheless, we recovered from 8 to 12 seats, and Tim announced his resignation soon afterwards.

Occupying a substantial part of the Lake District National Park, to the west we find Lake Windermere, Coniston Water and Grizedale Forest, while to the south the resort of Grange-over-Sands looks out over Morecambe Bay. Sedburgh, once in Yorkshire, is towards the eastern boundary, while Kirkby Lonsdale, once in Lancashire, is an idyllic spot by the River Lune complete with 'Ruskin's View' named after the artist and writer. Rydal Fell and Water, and Grasmere are in the northwest. Literary associations continue with William Wordsworth, Beatrix Potter, Arthur Ransome, and the guidebook writer Alfred Wainwright.

With its classic walking country and views to die for, the area has long catered to visitors. Farming remains an important source of income and contributor to the local economy. The 'Bay Powerhouse' part of the government's Northern Powerhouse, was launched this year and sees Lancaster, South Lakeland and Barrow councils working in partnership.

The West Coast mainline runs through, except nowadays the trains stop at Lancaster and Penrith and not Carnforth - the Northern service connects Manchester Airport with Barrow-in-Furness. The M6 has three junctions serving Sedbergh, Kendal and the Lakes.

The constituency was devastated by Storm Desmond in 2015 and even today, there is still a struggle to repair the infrastructure, with a recent spate of announced delays. The government fund is managed by Cumbria County Council. It may be beautiful, but the seat has several issues to contend with https://www.facebook.com/timfarronmp/videos/607618250007344/

The average full-time salary is £475.80 a week, 33.3% are degree qualified, and 5.2% were born outside the UK [ONS]. 72% of homes are owner-occupied - over 8% above the regional and national averages - while social housing renters are 10.6% compared with over 18% regionally and nationally [HoC Library].

The Conservative candidate once again is James Airey. Originally from Kendal, as a county councillor representing Ulverston in the Barrow and Furness constituency, he is the Leader of the Conservative Opposition group. He is also a South Lakeland District councillor. In the 2005 General election he was their candidate in Morecambe and Lunesdale, failing to unseat the Labour MP in a seat which has since become a highly marginal Tory hold.

Labour have selected Phillip Black, who lives in Lancaster and is a city councillor there. He is campaigning against school cuts in the constituency. There is quite a lot of sympathy for Labour in Westmorland and Lonsdale, but it seems never to have been exploited. He is well placed to commute between marginal and very marginal seats which Labour need to hold or have a chance of winning.

The Brexit Party are fielding Steven Bolton, who does not appear to be attending hustings.

As part of the Unite to Remain alliance, the Green Party are not standing a candidate.